Difference between revisions of "Shrimp" 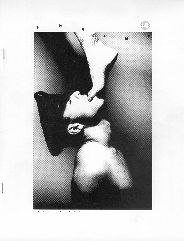 Shrimp is a zine created by Vaginal Davis.

Published in Los Angeles, Shrimp is a one-shot off-shoot of Vaginal Davis' previous zine Fertile LaToyah Jackson. In her editorial for the zine, Vaginal asks, "If everyone had a nice hefty foot in their mouth all the problems in the world would be solved, right?" The title 'Shrimp', as the editorial explains, refers to a sexual act in which "the licking and sucking of feet is not only encouraged BUT celebrated. Boy feet/girl feet...to shrimp is to love".

Aside from shrimping, many other topics are covered in the zine. Photo essays of subjects such as The Goddess Bunny; the making of John Aes-Nihil's film The Drift; "Spew", the Zine Convergence in Chicago; Hollywood Parties; Pedro Muriel and Esther, or PME, Vaginal's band with Glen Meadmore; bondage photographs by Rick Castro; artist G.B. Jones; and the group Psychodrama.

Glenn Danzig of the Misfits is interviewed by Ms. Davis. He quickly begins to irritate Vaginal who suggests, "You don't want to get on a 6' 6" black drag queen's raw opened nerve, because honey I didn't just fall off the turnip truck." Glenn admits that he can see that. Ms. Davis also interviews Fugazi and this interview goes better. Ian MacKaye tells Vaginal, "You're my fantasy love goddess" to which Vaginal replies, "This interview is getting off the track". Excerpts from these two interviews from Shrimp were featured in Outpunk # 6, a special compilation issue of notable zines chosen by the editor, Matt Wobensmith.

Shrimp was published in the mid 1990's. As the editorial states, "If anything in the contents of this publication offends, be noted that this publication is produced by a young militant african american drag queen who not only welcomes confrontation but encourages it, so if you are so inclined to challenge a 6' 6" ghetto warrior raised in the projects of Watts, California, by all means make yourself known to her".