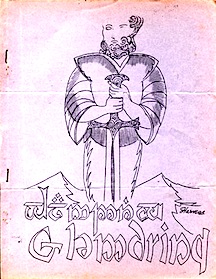 Glamdring was a fantasy and science fiction fanzine by Bruce Pelz.

Published in Los Angeles, California, U.S.A., in the 1960s, Glamdring was primarily dedicated to fanzine review and listings. The fanzine's coverage of articles and listing of fanzines devoted to Tolkien make it of particular importance to Tolkien researchers and collectors.

Fanzines and fanzine articles mentioned in Glamdring included Cry of the Nameless, NeoLithic, Orcrist, Psi-Phi, Quelquechose, and Triode, among others.

At the same time he was releasing Glamdring, Bruce Pelz was publishing and co-editing with Ted Johnstone the first U.S. fanzine devoted to Tolkien, called I Palantir.