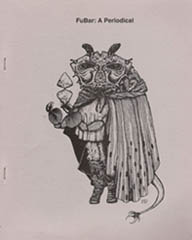 The theme for issue 3, which appeared in 1986, was "Cats and Dogs". it featured writing by Wayne Edwards (Palace Corbie), and a reprinting of "Cats & Dogs", by Lovecraft. Cover art was by Jo.

Issue four was devoted to "At The Root" by Lovecraft and was released in 1986. Cover art was by Jo.

Issue 5 was devoted to Lovecraft's essay, "The Materialist Today" and was published in 1986, with cover art by Jo.

Issue 6 was the final issue, and featured bibliographies and essays about prominent Lovecraftian small press publications, such as The Lovecraftsman, Nyctalops, The Dark Brotherhood Journal, Crypt of Cthulhu, and others, and came out in 1987. Cover art was by Brenda Neufeld. Interior art work was by Brenda Neufeld and Roger Stewart.