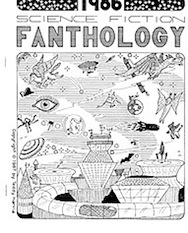 It included the contributions "Fizz! Buzz!" by David Langford (Ansible), and "Thank You Girls" by Chris Priest.