Difference between revisions of "Antithesis" 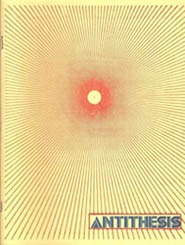 Antithesis is a science fiction and fantasy fanzine published by Chris Sherman.

Antithesis was published in Minneapolis, Minnesota, U.S.A. in the 1970s. The first issue appeared in December 1973, and subsequent issues in 1974. The fanzine included articles, essays, fiction, poetry, artwork, and letters.