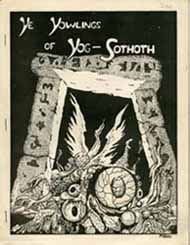 Ye Yowlings of Yog-Sothoth was a fanzine edited by Michael H. Cline and published by Ars-de-Mort Publications.

Appearing in the 1980s, this fanzine was devoted to H. P. Lovecraft. It was a twenty page publication containing fiction, poetry, reviews and art sections. The first issue came out in 1981 and two issues followed, the third in 1982. It was published in River Ridge, Louisiana, U.S.A.

One issue featured a reprint of the H.P. Lovecraft poem, "The Young Folks' Ulysses".

Michael H. Cline was well regarded as a fan artist, doing covers for publications such as Crypt of Cthulhu, among others, as well as being a writer, whose story "The Return" is regarded by E.P. Berglund as being a part of the chronology of the Cthulhu Mythos.