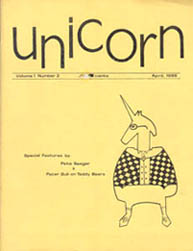 Unicorn was a small press publication by Karen Rockow.

Subtitled "A Miscellaneous Journal", Unicorn was published in Brooklyn, New York, U.S.A. The first issue appeared in 1968, and 12 issues were published, the last in Summer 1976. Volume 1 consists of 4 issues, Volume 2 consists of 5 issues and Volume 3 consists of 3 issues. Unicorn dealt with folklore and fantasy, and included articles and essays, amateur fiction and poetry, book, film, and fanzine reviews, art portfolios, and letters. Tim Kirk was the Art Director and Editor. Zelda Kahan was the Poetry Editor.

Articles on Edward Lear, C.S. Lewis, George McDonald, Thomas Love Peacock, Dorothy L. Sayers, and JRR Tolkien were featured, as well as a primer on Demonology, and articles on civil liberties, and the Templars. Reviews of films included Chitty Chitty Bang Bang and Yellow Submarine. Reviews of books included Tolkien: A Look Behind The Lord of the Rings by Lin Carter and The World of Fanzines by Fredrec Wertham.

In his fanzine Devlin's Review, Buck Coulson ranked Unicorn as one of the eleven best fanzines for the years 1976 - 1978.