The Witch and the Chameleon 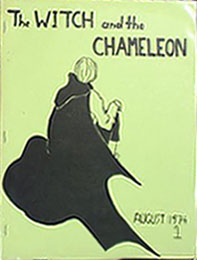 The Witch and the Chameleon was a science fiction fanzine edited by Amanda Bankier.

Published in Hamilton, Ontario, Canada, the first issue appeared in 1974. Five issues were released until the last one, which was a double issue, appeared in 1976. It has been credited as being the first feminist science fiction fanzine.

According to the book Gateways to Forever: the story of the science-fiction magazines from 1970 to 1980 by Mike Ashley;

"In preparing the magazine, Bankier had placed an advert in the Worldcon Progress Report, which yielded several responses. The first was from Vonda McIntyre who became a regular contributor and whose voice set the tone for the magazine. Among her contributions was a fascinating analysis of a year's worth of short fiction. 'About 2,675,250 words' (#3, April 1975), which showed how long it was taking for attitudes to change amongst most of the male writers in the sf magazines."

Amanda Bankier was interviewed for Janus about feminism, science fiction, and her zine. She was a Guest of Honour at the first WisCon in Madison, Wisconsin, U.S.A., in February 1977.