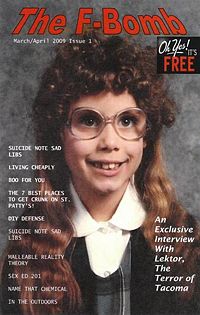 Since early 2009 The F-Bomb has been a compilation zine based out of Tacoma, Washington, U.S.A., edited by Tina Armstrong.

The F-Bomb is a half-sized (digest) with a full-color cardstock cover. Content varies from lists, letters, fiction, creative non-fiction, poetry, art, collages, comics, and more. As of October 1st, 2011 it is solely a cut and paste zine.

The F-Bomb has had a few non-themed issues, but for the most part they have a theme to every issue. Previous themes have included Storytelling, Music (with a full CD of local artists from the Tacoma area included) Macabre, Sex, Holidays, Gender, and Food. The Secrets issue is due out in November of 2011.

Because there is always an open call for submissions, The F-Bomb's biggest draw is diversity. Diversity in contributors and diversity in submissions. Under a theme, you can really see how many perspectives are being shown per issue.

In 2011 The F-Bomb was named best zine in Tacoma by Tacoma's alternative weekly newspaper, The Weekly Volcano. Bitch Magazine named The F-Bomb one of the best three zines at the Portland Zine Symposium.

Tina Armstrong is also one of the co-editors of Sorrow Pants.