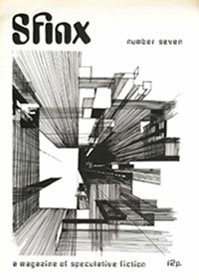 Sfinx was published in the UK. The first issue appeared in 1969.

In 1982, a new series of Sfinx was begun, starting again with issue 1, and running till issue 7 of May 1995. The only editors listed were for issue 4, and they were Neal Tringham, Maria Hamilton and Ivan Towlson.

David Langford was a frequent contributor. In his book, "The Sex Column and Other Misprints", he describes finding the publication; "So when I went to Oxford for three years of failing to study physics, I was primed to seek out SF contacts. Sure enough, the crowded notice-board of my college (Brasenose) featured the cover of an obviously SF publication called Sfinx - the university SF group's fiction magazine...You could tell the publishers had cosmic minds, by their total failure to provide a price or address. But I tracked them down anyway."