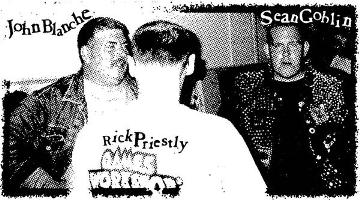 Sean "Goblin" Aaberg with John Blanche and Rick Priestly in 1997.

Sean "Goblin" Aaberg is a conceptual artist from Oakland, California. He and his family are currently residing in Eugene, Oregon.

Sean came up in the punk scene of the early 90s, gaining notoriety while playing drums for and producing all promotional art for his hardcore band The Masked Men. Sean was the only zine editor in the Bay Area at the time who identified and dressed like a Chaos Punk, with multi-colored bi-hawks, spiked and studded jacket, bullet belt and all that sort of thing.

Sean got into zines after picking up an old issue of Factsheet Five at Dark Carnival Books in 1988. He was stunned by the incredible variety of strange underground zines being published at the time and was determined to add to the pile. Sean's zines are consistently critically acclaimed by other zine editors, but rarely gain a large following.