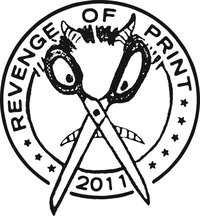 Revenge of Print is a challenge to zinesters, minicomic creators, and other independent publishers to produce at least one new issue of their publication (or to make their first zine) in 2011. This project originated with Baltimore's Atomic Books and Chicago's Quimby's Bookstore.

In promoting the project, Liz Mason of Quimby's said, "We're tired of all the end of paper, the end of publishing as we know it stories. We've been hearing it ever since we've been open (which is going on almsot 20 years now). ... Maybe you were thinking in the back of your head you'd do another issue one day. Now is the time."

As Benn Ray of Atomic Books posted at the bookstore's blog, "A healthy zine culture means we need access to and critical discussion of zines," and "Print is only dead if you want it to be."

Sponsors for the project include Maximum Rock 'N' Roll, Microcosm Publishing, Razorcake, Xerography Debt, and Zine World, with numerous other zine libraries and zine distros endorsing it. A Facebook group was created to track participants and for participants to promote their new zines. The group includes discussion boards for participants to share information about zine distributors, zine review outlets, and publishers interested in trades. As of early May, more than 950 people had joined the group. A group was also created at We Make Zines.

The logo was designed by Henry H. Owings.

A list of zines participating in Revenge of Print