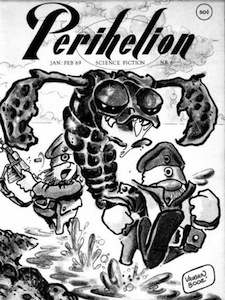 Published in Elmhurst, New York, U.S.A., Perihelion was originally titled Seldon Seen (named for the Issac Asimov hero Hari Seldon ) for the first two issues. The first issue was released April 1967, the next in July-August 1967. Both were mimeographed, but after the name change it was offset printed and 5 more issues appeared, with the last issue, #7, published in Summer 1969. For issue 7, Christine Giglio was Associate Editor.

Columns for Perihelion were contributed by Kenneth Scott.

Poetry for Perihelion was contributed by Christine Giglio, and Lesley Sussman.