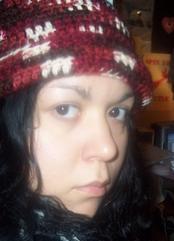 Noemi Martinez is a zinester, zine editor, writer, poet and indie press publisher who lives in Weslaco, Texas. She has been involved in alternative forms of media since the late 90s. A single mother, her zines address issues of racism from a Chicana/Puerto Rican perspective, racism, white privilege, immigration, poverty, displacement and identity. In 2014 she started a small indie press, Hermana Resist Press, with roots in DIY that focuses on the work of women and people of color. She has organized poetry events and zine events, including the first RGV ZineFest in the Rio Grande Valley and Mujerfest, a festival that ran for several years in the RGV that showcased women and women of color musicians, artists, artisans, and poets with discussions and workshops that were led by women and women of color.

Born in Chicago, Illinois, Martinez moved to Edcouch, Texas when she was 9 with frequent trips and summers spent in Cerralvo, Nuevo Leon, Mexico. Moving to other small cities in the Rio Grande Valley, Martinez was living in La Blanca, Texas when she found Pander Zine Distro online. The first zine she ordered and read was Taryn Hipp's Girl Swirl. She sought other women of color zinesters and found other women of color zinesters via Bianca who wrote Mamasita, among other zines. She then found a number of zines by people of color that included Pure Tuna Fish, Hard as Nails, Bamboo Girl, Quantify, Framing Historica Theft and Casa de los Trucos. Inspired by these and noting the lack of zines by women of color, specifically zines by Chicanas, Martinez produced her first zine, Making of a Chicana.

She is also the creator of the POC_Zinesters community at Livejournal. She was the owner of C/s distro, which stocked and distributed zines by women and people of color.

In 2015, a collection of Hermana, Resist zines will be published by the small press Sweet Candy Press.

Zines in the Community