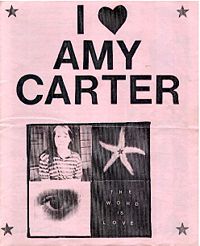 I [Heart] Amy Carter was a zine written by Tammy Rae Carland. It is an early example of the Riot Grrrl and queercore zine scene.

The zine followed the breakup of "Amy Carter," a punk band consisting of Tammy Rae, Kathleen Hanna, and Heidi Arbogast, who had together founded an independent art gallery in Olympia, Washington, U.S.A. After Tammy Rae moved to Long Beach, California, to attend art school, she started I [Heart] Amy Carter. Tammy Rae wrote in A Girl's Guide to Taking over the World: Writings from the Girl Zine Revolution that she began the zine as a safe place to examine her identity as a queer woman and as a survivor of abuse.

Frequent topics included Tammy Rae's admiration for former first daughter Amy Carter and sociological observations about class and sexuality. Excerpts from tabloids and magazines highlighting pop culture's views of women were often accompanied by discussion of stereotypes. Also discussed were filmmakers such as Sadie Benning, and punk groups such as Fifth Column and Team Dresch.

Five issues were published between December 1992 and 1995.

Selections from I (Heart) Amy Carter were reprinted in the 2013 book The Riot Grrrl Collection, compiled by Lisa Darms from The Fales Library of NYU Riot Grrrl Archives, and published by The Feminist Press.