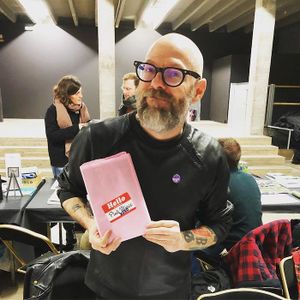 Dan Rhatigan is a New York-based zinester and type designer, who has been publishing comic books and zines every now and then since he was a little kid.

He currently publishes the queer zine Pink Mince and its spin-off Pink Mini.

In the 90s, while working on his zine Rumpus Room, he teamed up with Kris Kane, Josh Saitz, and Jeff Chapman as the Zine Syndicate to set up the alt.zines DMZ, a companion web site to the alt.zines newsgroup.