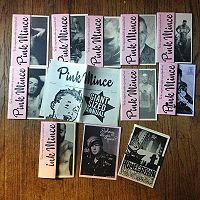 Pink Mince is a queer zine first published in London and now out of New York City by Dan Rhatigan. Its aim is "to delight, titillate, amuse, provoke, and inspire." That is to say: it features jokes and blokes, possibly with a point behind it all.

The content is mostly gay stuff, but it is a lot less straightforward than that. The standard tagline is that Pink Mince is "for the confirmed bachelor of exceptional taste", but it is also described as "a journal of contemporary typeface design illustrated with pictures of dudes". Each issue contains a number of features related to a specific theme, and the content is typically a mixture of writing, photography, and illustration (often scans of illustration from vintage books and magazines).

A number of features that were eventually cut from the final versions of each issue have been published as the Pink Mini series — 8-12 page mini-zines containing a single feature.

Pink Mince on the web