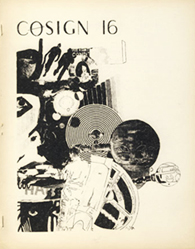 Cosign was a science fiction fanzine published by the Central Ohio Science Fantasy Society, and edited by Bob Gaines.

The Central Ohio SF Society was formed in the mid 1960s in Columbus, Ohio by Bob Hillis, Brian Burley, and Larry Smith. The club first met at the Paperback Gallery bookstore, and later at the Public Library, and had between 20 and 30 members. Cosign was the Official Organ of the club, and 16 issues of the fanzine were released. Beginning with the first issue, Bob Gaines was the editor. Issue 2 was published in 1966. For issue 12, released July 1967, Larry Smith was the editor. For issue 13, published September 1967, Rod Goman was editor. Issue 14, with Bob Gaines again as editor, appeared in December 1967. As of issue 16, Cosign was published independently of COSFS by Bob Gaines. 17 issues appeared.

Contributions of art work came from Robert E. Gilbert, and Gregg Williard (cover #9), among others.