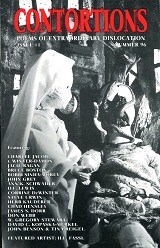 Contortions was subtitled "Poems of Extraordinary Dislocation", and was devoted to poems of the macabre. It was published in Arcata, California, U.S.A. Issue #1 was released in 1996 in a limited edition of 150 numbered copies.

The cover and interior artwork was by H.E. Fassl.