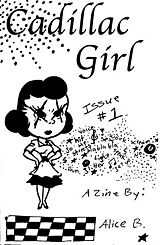 Cadillac Girl zine is a perzine that was created under the pen name Alice B. in 2004. In 2012, the zine started up again with issue #3 under the writer’s real name Mel W. More info on current and past issues are available on the zine’s website.

Issue 1: This issue contains thoughts and experiences, like quitting a waitressing job and her mother going away to prison. It also includes work from contributors, like a poem titled 'The Story of a Girl'.

Issue 2: This issue deals with a bad break up and confusion. Poems and stories about poverty, insecurities, and a 'Rushed Girl's Wish list'.

Issue 3: Is about how life has changed in the past six years since the last time Cadillac Girl was published; being a mother, a wife, and trying to finding one-self again. Released in June 2012

Issue 4: This issue discusses abortion, the thought of divorce, and a struggle with self image. Released in July 2013

Contributors have included Deirdree Prudence, editor of Gag Me With A..., and co-editor of Sorrow Pants.