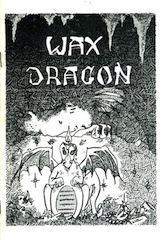 Wax Dragon was a fantasy fanzine edited by Irvin L. Wagner and Susan Wagner, and published by New Fantasy.

The first issue, published in 1977, was 32 pages and featured the article "A Guide to Fantasy Wargaming" by Scott Bizarre; the columns "The Bight of Benin" by Charles R. Saunders (Dragonfields, Stardock); and "Stalking the Winnebago Eggshell" by Lawson W. Hill (Myrddin); and the short story, "The Spirit Duplicator" by Darrell Schweitzer. Contributors of art included William Church, A. B. Cox, Michael Littlejohn, and Brian Pavlac.

Issue #2 was published in 1980. It featured cover artwork by William Church; and the articles "Forum on Fantasy" by John L. Leland; and "Blackelven" by Charles R. Saunders. Short stories included "Specter in the Buried Chambers" by Jessica Amanda Salmonson (The Literary Magazine of Fantasy and Terror, Fantasy Macabre, Windhaven); "First of the Litter" by Irvin L. Wagner; and "The Half-Scalan" by An-Clovis.

Issue #3 was also released in 1980. It featured cover art by Randy Holmberg. Articles included "Is It True What They Say About Leopard Men" by Charles R. Saunders and the short stories "Ding-Dong Bell" by B. F. Watkinson; and "Feast of the Gods" by Al D. Cockrell (Wyrd).