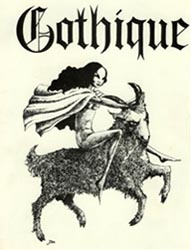 Gothique was a fanzine edited by the collective of Jean Dempsey, David Griffiths, Ernest Harris, Stan Nichols and Derek Stokes.

Gothique was a fantasy and horror fanzine. The first issue was published in July 1965 in the UK. A special issue of Gothique was part of the Thirdmancon Combozine (April 1968), which also included special issues of Badinage, Scottishe, and Speculation. The last regular release was issue 9, published in October 1969. By this point the remaining editors were David Griffiths and Stan Nicholls. The last issue, #10, was published in an extremely limited run of 40 copies in March 1970, until the Special Anniversary Issue appeared in July 1985.

The editors simultaneously releasing the science fiction fanzine Stardock from 1968 till 1970.

Featured were interviews with Peter Cushing and Harold Harvey.