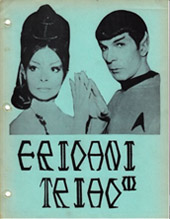 Issue 2 appeared in 1971. It was 120 pages, featuring articles by Gail Barton, Doris Beetem, fiction by Doris Beetem, and Judith Brownlee, and artwork by Dee Beetem, and D. Carol Roberts. Letters came from Star Trek actor Barry Atwater, among others.