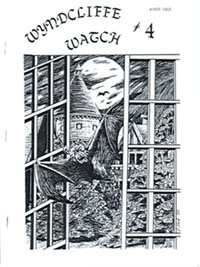 Wyndcliffe Watch is a fanzine edited by May Sutherland and published by Medallion Press.