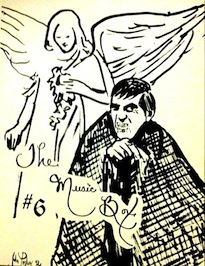 The Music Box was a fanzine published by the Oregon Dark Shadows Society.

Devoted to the television serial Dark Shadows, this fanzine was released in the 1990s in Portland, Oregon, U.S.A. It was edited by Connie Jonas and published by Harmony Road Press. The Music Box was named for the gift that Barnabas gives to his fiancé Josette before her death on the eve of their wedding.

Harmony Road Press also released several fiction novels devoted to Dark Shadows characters, such as A Matter of Trust, Masks and Facades, and the anthology Shadowed Reflections. It also released the anthologies Christmas in Collinsport, The Collinsport Players Companion, and a fanzine devoted to actress Lara Parker, who played the witch Angelique on Dark Shadows, called The Lara Zine.