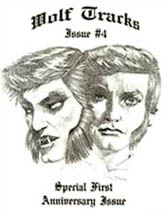 Wolf Tracks is a fanzine by Elaine Garner.

Wolf Tracks was published in Temple, Texas, U.S.A. It is devoted to the late 1960s gothic television series Dark Shadows. In an ad in The World of Dark Shadows, the fanzine described itself: "It is dedicated to Quentin and Chris Jennings as they lived under the werewolf curse, and to Barnabas and all the people who were part of their lives...Examinations of legends, films, books and items of interest to werewolf fans is also discussed, giving you a chance to send in letters and be actively involved!" It featured fan stories, poems, and art. Four issues were released in the 1990s.

Contributors of fiction included Sandy Adams, Kay Kelly, Lucidscreamer, and Wilusa, among others.

Contributors of articles included Wilusa, among others.