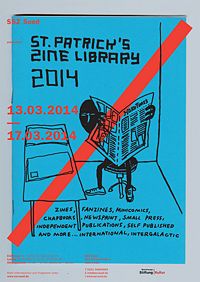 The St. Patrick's Zine Library is a "traveling" zine library. It is open every 17th of March from 9 a.m. to 5 p.m. (regular opening hours). There is no official permanent residence for the collection and once a year the library pops up on different locations, "to save the kids from the forces of evil" (as stated on a flyer/invitation card).

The library was founded by an anonymous person and is run by volunteers.

Each 17th of March

In 2014 the collection was displayed at SSZ-Sued, an small exhibition space in Cologne, Germany. Starting March 13th there was a presentation or zine launch with new zines by Missis Nasti aka Franziska Nast, Torben Röse, Marco Zumbé, Tom Krol, Stalker Evans, TFGC Publishing and TBOOKS COLOGNE. On friday there was a reading with zinister Al Burian (Burn Collector), as well as a library introduction with Victoria Neuman on Sunday 16th.

In March 2016 the library is open at The Millionaires Club, a 3-day Comics, Posters, and Graphics festival held in Leipzig, Germany.

Among zines, fanzines, minicomics, newsprints and other small press publications the library hosts a "motley crew" of zines produced by young people, sometimes related to workshops held by artists, writers and/or zinisters at schools or other facilities or as a private event. These publications are predominantly in German or English language.