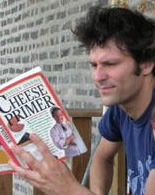 Al Burian (*1971) is a writer and musician. He grew up in North Carolina, and is currently residing in Berlin, Germany. He is best known for his long-running personal zine Burn Collector, as well writing columns for HeartattaCk and Punk Planet. He has also released the minicomic Things are Meaning Less. Al has published two issues of a travel zine called Natural Disasters.

He was a founding member of the punk/hardcore band Milemarker, and used to sing and play guitar in the band Challenger. Since late 2011 he continued 'kicking out the jams' with his Berlin based band Big Eater.

Beginning in the mid-nineties, Burian has distributed his work through the tight-knit network of the DIY punk music/art scene. He has been doing reading/speaking performances since the year 2000. His work has garnered praise from such legitimate institutions as the Utne Reader and McSweeneys Best Nonrequired Reading.