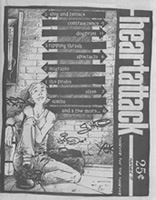 HeartattaCk was a widely distributed punk zine that was published from March 1994 to June 2006.

Edited by Kent McClard, it was usually published quarterly and the cover price was always low compared to other major zines. This helped increase circulation. The zine contained letters from readers, reviews of music and zines, and band interviews. HeartattaCk would not review anything with a barcode, which angered some in the underground scene. The "H" and "C" were emphasized in the zine's title; HC is a common abbreviation for hardcore music.