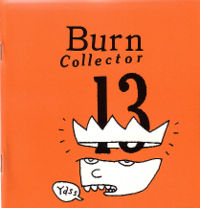 Burn Collector is a zine written and published by Al Burian in Chicago, IL, U.S.A. Later issues were published in Berlin, Germany.

Burn Collector is one of the more popular zines in the perzine category. Issues 1 through 9 were collected and released as a book by The Buddy System, which is now in its fifth printing. Burn Collector was featured in Volume Two of 1997's Zine Yearbook.

The zine contains stories both from his childhood and his life after college, as well as interviews and comics. Al's writing often approaches grim subject matter, like contemplating suicide, the end of the world, or just run-of-the-mill existential despair, in a superbly humorous fashion.

Issue #16 was released April 2012 in Berlin (in collaboration with Pegacorn Press). The zine contains comics, essays, reviews, and interviews with musician Tim Remis and radical mental health activist Sascha DuBrul. This issue is sub-titled “Music and Mania”, and among other topics examines the intersection between creativity and losing your marbles.

Al Burian currently lives in Berlin, Germany. He has also published Things are Meaning Less, a collection of comics from the '90s, a perzine/comic called Utopia, and most recently, a travel zine called Natural Disasters, now in its second issue.

Burn Collectior is included in the Sophia Smith Zine Collection at Smith College and the St. Patrick's Zine Library.