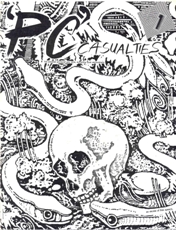 P.C. Casualties is a zine from Ann Arbor, Michigan.

The first issue of P.C. Casualties was created by Mark and Allison in the early 1990's. The editors refer to their zine as "yet another punkoid gay zine, suffering from earnestness". It features a glow-in-the-dark cover and an interview with Kitchens of Distinction's lead singer Patrick, a work of fiction entitled "The Lizard Club" by Steve Abbott that was later to be included in his book of the same name, photos and descriptions of imagined politically incorrect Barbies, an article on masculinity by Angus of the band Academy 23, an article about a Samhain ritual called Dance of the Black Sun by Gabriel of BloodRose, as well as reviews, erotica, and artwork by Akasha Fluegge, and Dave, also of Academy 23.

The second issue of P.C. Casualties was edited by Mark Freitas. This issue featured an interview with Pete Shelley and Steve Diggle of the British punk band Buzzcocks. fiction by Scott Pierce, articles on Martin Denny and Exotica, techno rave culture, and not breeding, as well as art work and collage. Contributors included Allison Van Norman, Japhet, Scott Pierce and Brenden Gillen.

An excerpt from PC Casualties appeared in Outpunk # 6, a compilation issue of articles from zines that editor Matt Wobensmith felt had impacted the scene.

Mark Frietas subsequently ran Homocore Chicago with Joanna Brown. As well, he appeared in the G.B. Jones' film The Yo-Yo Gang. At present he plays guitar in the band The Rotten Fruits.