Once Upon a Haiku 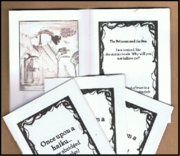 Once Upon a Haiku by Su Mwamba (original version)

Once Upon a Haiku: Very Abridged Fairy Tales by Su Mwamba was originally released as a set of three 16-page mini-zines in November 2010. Each volume contained a brief introduction to haiku as a poetic form, and a selection of haiku (each distilling the essence of a traditional fairy tale such as Sleeping Beauty, the Emperor's New Clothes, etc.) illustrated with classic fairy tale illustrations.

In a quality control exercise, Once Upon a Haiku underwent a complete re-design and was re-issued in May 2011 as a condensed, single volume mini-zine, an imprint of the Enchanted Times and featuring fictional small ads from Enchanted Realm sponsors.