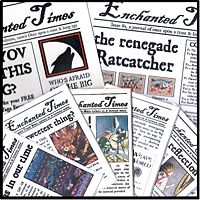 Enchanted Times was first published in 2009. It is an ongoing series of A5 (/half-size) zines written by Su Mwamba, featuring revisionist short story versions of traditional fairy tales and other related features. Later issues feature guest editorials and artwork by additional writers and artists working within the re-told fairy tale genre.

The Enchanted Times Mini zine is released at random intervals between issues, featuring previews of and alternative perspectives on the stories to be featured in the next full-size edition. The short stories/flash fiction tend to veer from the traditional happy ending while the supplementary features and Mini editions are of a more light-hearted nature.

The Enchanted Times has also spawned a number of additional related mini-zines including Once Upon a Haiku and the Goblin Market Coupon Book (featuring fictional ads & offers from Enchanted Times sponsors).

ET#3 was also released in a black & white edition, without the Magic Beans free gift.

#4 (February 2012)
STORY Naked - the story of the nightingale behind the Emperor’s recent & shameful public exposure. Includes illustration by Holly Mitchell.
STORY An Exceptional Clothier by guest reporter Anne E. Johnson – revealing secrets about the Emperor’s New Clothes, Cinderella and more
STORY Rates of Exchange - the tale of a simple barter gone dramatically wrong (see also ET Mini #3.5 vol. iv for a preview of this story entitled, 'A Fair Exchange')
INTERVIEW The Art of Gold - in which a friend and colleague of Rumpelstiltskin presents a defence of the dwarf's actions
PROJECT The Nightingale - a cross stitch chart
PROJECT WeaveWorld presents a DIY Swatch-Weaving Tutorial (faux advertisement feature)
OTHER Small ads
OTHER The Mirror book review supplement
OTHER Puzzled Page, including 2 word puzzles derived from micro-fiction re-tellings of Red Riding Hood and Snow White

SPECIAL EDITION (March 2012) - a limited print run of 20 signed & numbered copies (A6 format)
EDITORIAL Reverse, Revise, Recycle - examining the changing expectations of life within the Enchanted Realms
ILLUSTRATIONS Snow White and the Seven Lemur; Little Red Riding Lemur - illustrations by...Lemur
STORY My Toady - a 4-page story with illustrations by April E. Johnson, based on the traditional tales of enchanted frogs & princes
ILLUSTRATIONS Little Red Riding Hood; Alternate Ending - illustrations by Sharon Van Dussen
STORY Wolf at the Door - preview of a story to appear in Enchanted Times #5, by Su Mwamba
ILLUSTRATIONS The Little Match Girl - a watercolour story by Heather Cuff
OTHER Contributing Artists - mini biographies of all involved with this Special Edition of the Enchanted Times
OTHER Small ads 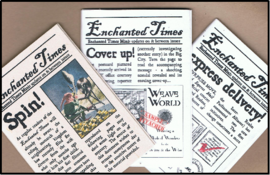 #0.1 vol. i - reverse, revise, recycle (May 2012)
EDITORIAL an introduction to Enchanted Realm philosophies
ILLUSTRATIONS exclusive lemur-based artwork
OTHER preliminary report on the case of Mr. B. B. Wolf v. the Pygg brothers (proprieters of proprty rental agency, Pygg Lets)
OTHER Small ad from an Enchanted Times sponsor

#0.5 vol. i - peas in our time (July 2011)
EDITORIAL announcement of the royal engagement including
first public appearance of the bruised Princess
a warning from the Enchantments Protection Agency regarding a proliferation of blemish agents on the black marketplace
OTHER a few words with the Queen's Gardener, Herr Mendel, about varieties of Pea
PROJECT revised chart for Princess & Pea cross stitch pattern previously available in Enchanted Times #1
OTHER Small ad from an Enchanted Times sponsor

#2.5 vol. i - the rat in the hat came back (May 2012)
EDITORIAL what happened when the Pied Piper returned to the scene of his most infamous crime
ILLUSTRATION exclusive original Evil Rat by Linda Bowman
PROJECT exclusive Evil Rat cross stitch/blackwork pattern
OTHER Small ad from Enchanted Times sponsor, Pied Piper Pipes

#3.5 vol. i - Spin! (June 2011)
EDITORIAL Light is shed on the recent separation of our ruling monarchs
FEATURE A letter to the Queen from Mr R. Stiltskin's solicitor regarding non-payment of bill for services
printed on recycled paper embedded with flecks of golden straw
OTHER Small ads from Enchanted Times sponsors offering related services

#3.5 vol. ii - Cover up! (July 2011)
FEATURE Reprint of postcard received from an Enchanted Times reporter on location in the Big City, including a heavily censored message regarding a scandal involving the Emperor
EDITORIAL A consideration of the corrupt practices of City Bureaucracy
OTHER Small ads from Enchanted Times sponsors

#3.5 vol. v - Upon Reflection (January 2012)
EDITORIAL An investigation into reports of Truth-Be-Told mirror malfunctions with case studies relating to the Snow Queen, the Emperor (& his New Clothes), and Snow White
OTHER The search continues for "a man of diminutive stature described as "ugly, bandy-legged, and with an unpronounceable name"
OTHER Small ads from Enchanted Times sponsors

#4.5 vol. i - Wolf at the Door (March 2012, limited edition)
FEATURE STORY A full length, limited edition preview from forthcoming ET#5
ILLUSTRATION by Holly Mitchell, reprinted from ET#3
OTHER Breaking news regarding a beautiful village teenager allegedly being held against her will within the country manor she shares with her betrothed (branded as 'beastly' in a letter to her father)
OTHER Small ads from Enchanted Times sponsors

#4.5 vol. ii - the beast within (May 2012, limited edition)
EDITORIAL News of an alleged hostage situation
OTHER Unrelated news regarding Lord Mackintosh of the Manor and his prize roses
PROJECT exclusive cross stitch chart of a magical Mackintosh bloom
OTHER Suspicions of foul play as the country mourns the loss of its Queen, whose demise followed the consumption of an apple pie...
OTHER Small ads from Enchanted Times sponsors

#5.5 vol. i - none so blind (June 2012)
VOUCHER for free packet of rapunzel seeds
EDITORIAL Announcement of our visionary king's plans for a healthy future
PRESS RELEASE Queen Rapunzel's point by point account of events leading up to the decision to provide rapunzel seeds for all households
OTHER The Witch Report apprehends the Bad Fairy thought responsible for the Big Sleep
OTHER Small ads from Enchanted Times sponsors

#5.5 vol. ii - the big sleep (June 2012)
EDITORIAL The Sleeping Beauty awakes!
Find out why the Princess Aurora has been forbidden from speaking directly with reporters. : Ponder the identity of her prince, who is unusually short, has an affinity with spinning wheels, a fondness for gold, and is very keen to talk babies.
OTHER Newly crowned Princess Cinderella steps forward as ambassador for StABS (Stop Abuse of Beautiful Stepdaughters) Foundation
OTHER Full page advertisement feature for Who's Afraid? Worry Bag plus small ads from additional sponsors

#5.5 vol. iii - a little goes a long way (June 2012)
EDITORIAL The Bad Fairy of the Big Sleep infamy) unleashes another curse, this time grown from a tiny seed, purchased in good faith
Discover the trail of heartbreak and destruction left in the wake of the tiny Thumbelina
OTHER A tragic report following the homecoming of a steadfast, one-legged soldier; how his all-consuming passion was matched only by an all-consuming flame. A goblin is being held for questioning.
OTHER Full page advertisement for Light of my Life: Matches Made in Heaven, plus small ads from additional sponsors