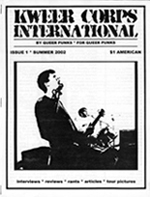 Kweer Corps International is a zine by Hank Revolt from Tallahassee, Florida, U.S.A.

The first issue was released in the Summer of 2002 and focused on the queer punk scene around the world. The cover featured the band Ninja Death Squad. The zine started out with an introduction entitled "Hey, y'all" and along side reviews and questionaires, the articles included in issue one were: "Matthew Shepard" by PunkFag; "Queer in a gutterpunk world" by Jeff Junker; "Commercial Music and Why It Sucks" by Mary Cook; "Ten Years in the Margins: Riot grrrl and queercore, British style." by Andy Linus; photographs of Ninja Death Squad taken by Angela Agitprop of Agitprop! Records; and "keep on fighting", a telling collection of hatemail the editor has received over the internet.

Issue two included the articles: "More Flamers! More Bull Dykes!: The Crucial Need For Flamboyance" by Neil Edgar; PunkFag writes about mainstream queers; Abe, editor of Swishblade and member of the band Fagatron keeps a show diary; an article by Jesse on conservative media; Damien on gender imbalance in the queer-anarcho scene; interviews with Matt Wobensmith of Outpunk and Angela of Agitprop Records, plus live show and zine reviews.