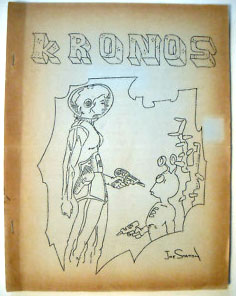 Kronos was a science fiction fanzine by Paul Gilster.

The Roger Zelazny story "The Injured", and the poem "Testament" were featured in Issue 2.

As described by Joyce Worley Katz in Hard Science Tales, Paul Gilster was part of Southern Fandom history: "...Once I spoke to Jim Hall in that bookstore on a Saturday afternoon in the mid-1960s, things started to happen. His son, Dave Hall telephoned that evening to invite us to his house the next weekend.

The Halls lived down in Crystal City, about an hour's drive from our St. Louis apartment, and I was keenly excited by the time we reached their home. There was a roomful of people waiting to meet us: David had spent the week rounding up all the science fiction readers he knew. There was Dave, his dad Jim, Harold Steele and his son, Paul Gilster, Hank Luttrell, and maybe one or two others.

We formed the Ozark Science Fiction Association (OSFA) that afternoon, talked late into the evening about books and magazine, our favorite authors and fanzine publishing. Dave, Hank and Paul were already publishing several titles each, since each belonged to multiple apas, and each of them were already publishing, or getting ready to publish a genzine (general subject fanzine)."