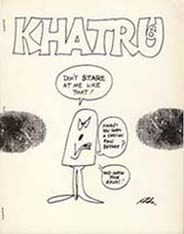 Khatru
Cover art by William Rotsler
(caption: "Don't stare at me like that! Haven't you ever seen a sercon fan before? And wash your hands!")

Khatru was a science fiction fanzine by Jeffrey D. Smith.

Khatru was published in the 1970s. When it first appeared in 1970 it was named Phantasmicon, but soon after the name was changed to Khatru.

Contributors to other issues included Jeffrey Frane (Hedgehog), and Angus Taylor. Taylor's essay in issue 1, "Reactionary Ideology in Science Fiction" has been noted as influential.

Also included were interviews with musician Jon Anderson of the band Yes, and writer Dick Francis with researcher Mary Francis, and with writer James Tiptree, Jr.