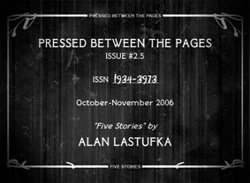 Five Stories (aka Pressed Between the Pages #2.5) is a video adaptation of the zine of the same name. The zine, by Alan Lastufka, is a thirteen-stanza narrative poem. Five Stories is a silent film, utilizing intertitles to narrate the story.

In a dream, Lastufka and his brother enter a five-story house, each of them carrying one empty box. The house is filled with their memories, which have materialized into pictures in frames and inanimate objects on end tables and bookshelves. Starting on the first floor, the two brothers have to weigh which memories are important enough to put into their respective boxes. The boxes have a finite amount of space, so some hard decisions have to be made about which memories they're going to keep and which they're going to leave behind - forget. 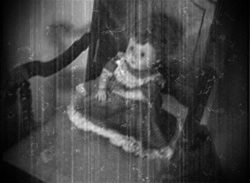 As they reach the third floor, a fire breaks out in the basement, engulfing the memories they've left behind. The fire covers ground faster than either brother can. It chases them up the stairs to the attic with everything they had to leave in the lower floors being destroyed - lost. The only exit is a single window, five stories above the front yard. 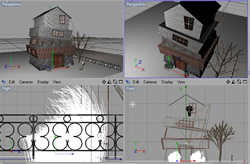 3-D CGI model of the house by Alan Lastufka.

Original conceptual drawing by Liz Baillie of the house.

Baillie's first completed scratchboard for the zine was of the five-story house Lastufka described to her, from his dream. Baillie's conceptual design was scanned, by Lastufka, into a 3-D CGI model for the film version, in Cinema 4D software.

All interior shots of the house were filmed with a Sony Cybershot digital camera in the house Lastufka shares with his roommate. The fire and flames, seen later in the short film, were digitally composited using Sony's Vegas Pro digital video editing software.

"Five Stories" aired four times on the Independent Film Channel (IFC) in May of 2007. The show times were as follows: