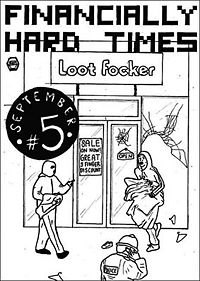 Founder Tom Casson produced this zine as a "small independent initiative". Its an illustration based zine which was released every month. The zine got alot of praise. Alex Zamora (who runs an online fanzines community) has labelled it "one of the Best British Zines". The zine itself started in May 2011. All in all 12 issues have been released until in April 2012 the "last issue ever" was published.

All issues are included in the collection of the St. Patrick's Zine Library.