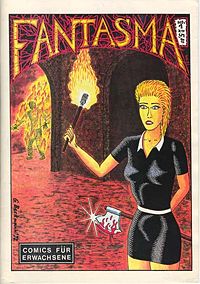 Fantasma was a comic fanzine edited by Gregor Beckmann.

Fantasma #1 was published November 1992 in Herdecke, Germany. The fanzine presented comic stories, grafic art (horror and fantasy) and a review section for other zines and comic publications such as Schwarzmarkt #1.

Gregor Beckman was the person behind this project: He contributed 11 pages of comic, did the reviews and translated some of the stories. Other contributing artists from Germany and the US included Jeff Gaither (Comic Trash), Christel Scheja, Christian Holl, Mennix, R.K. Sloane, Fritte, Kenneth B. Haas, Mathias Dinter, Irene Salzmann, Roman Turowski and Ludger Otten.

This first issue is included in the collection of the St. Patrick's Zine Library.