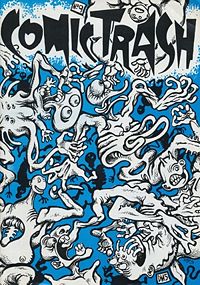 Comic Trash was an longrunning "artcore-zine", published by a collective (Holly, Fredy, Flori, Janosh and Boris Karloff) from Osnabrück, Germany. The zine was distributed by Testament Vertrieb, located in Bielefeld, Germany.

"This is more graphic arts than comics, though the styles vary a bit. Mostly a very punk look (indeed, some of these strips other cheerful things, as well as alienting buildings. Quite stunning, with the captions in a mix of German and English. (Factsheet Five #31 about Comic Trash #4)

Issues of Comic Trash are included in the collection of the St. Patrick's Zine Library.