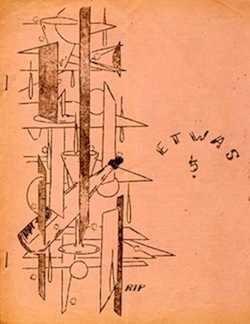 Peggy Rae writes in Bucconeer, the publication for the 1998 Baltimore Worldcon 56 convention (for which she was Chairwoman), "Etwas, my first fanzine, was laboriously typed onto stencils, using a manual typewriter and lots of corflu (blue, smelly, correction fluid). Both Robert Bloch and Harry Warner, Jr. had responded to my (typewritten) letters asking for material and I carefully re-typed the material they had mailed to me."

Ed Meskys, editor of Niekas, remembers Reggy Rae, "...I remember once Peggy Rae McNight, now Peggy Rae Pavlat, was doing her own little fanzine Etwas, She sent me Etwas for Niekas - something for nothing!"

Peggy Rae later published the fanzines Of Cabbages and Kings (and Baby Turtles), and Adventures On Earth.