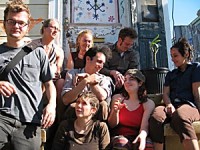 Ethan Clark is a zinester who lived in New Orleans and then Asheville.

He wrote the zines Chihuahua and Pitbull, A Little Guide to Truing Bike Wheels and the books Stories Care Forgot: An Anthology of New Orleans Zines and Learning with Intent to Fall.

In November of 2002, Ethan Clark joined fellow New Orleans zinesters Ammi Emergency, John Gerken, Willie Jones and Natalia to participate in the Y'herd Me Zine Tour, which travelled along the east coast to a number of cities. Ethan read selections from Chihuahua and Pitbull, which were later reprinted in the compilation zine Y'erd Me?, which documented the work read on the tour.

Stories Care Forgot: An Anthology Of New Orleans Zines was zine compilation book published in 2006 by Last Gasp that was edited by Ethan Clark, with an introduction by John Gerken. The book contains in their original format selections from twenty zines including: Chainbreaker, Nosedive, Crude Noise, Rocket Queen, Emergency, Factory Direct, Dear ___, I Wrote This Zine For You, I Hate This Part of Texas and Chihuahua and Pitbull, as well as author introductions about their experiences during and after Hurricane Katrina. Proceeds from Stories Care Forgot were to be split amongst grassroots New Orleans groups. Before Hurricane Katrina, Clark had left New Orleans and had moved to Asheville. During the storm many of the originals of these zines were lost and destroyed but Clark had taken with him copies of the zines which enabled him to put the book together. Clark did a zine reading and book tour as the book was being published to promote it.