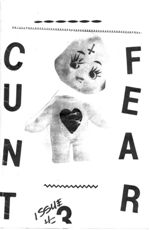 Cunt Fear was a punk zine published by Star Whore.

Published in San Jose, CA, the first issue appeared in 1994. The title was derived from a song by the UK band Crass. Cunt Fear was a vehicle for Star Whore to publish the photographs of punk bands she had taken at shows. Bands appearing in its pages included Bikini Kill, U.S. Bombs, Exene, Assfort, Tribe 8, Stone Fox, Joan Jett, Lunachicks, 7 Year Bitch, Debbie Harry, Cypher in the Snow and Boss Hog. Also included were reviews of shows, local bands such as Apeface, a centerfold of Darby Crash and a reprint of an article about The Germs, interviews with such luminaries as G.B. Jones, and editorials about various events in the life of Star Whore.

Cunt Fear ceased publishing in 1999; at this time a new zine emerged with the title Oblivious Nation, by the same, albeit more mature, editor, who now calls herself Miss Oblivious.