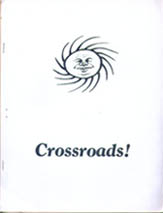 Crossroads was a science fiction fanzine by Al and Sally Snider.

Published first in New Jersey for the Brown University Science Fiction Union, the first issue of Crossroads was published in April 1969. By issue # 13, (Volume 2, #1), released in Fall 1972, mention of Brown University has been dropped,

Writing about fanzines of the late 1960s, Arnie Katz said, "Science Fiction Review, Crossroads, and the rest were a feast for those who enjoyed heavyweight intellectual sparring," in his article "The Philosophical Theory of Fan History".

Crossroads was one of the fanzines in which Grant Canfield's art work first appeared. Other contributors of art included Tim Kirk , Cynthia Goldstone, and Bill Rotsler .

Letters came from Ted Johnstone (Mest, I Palantir), among others.