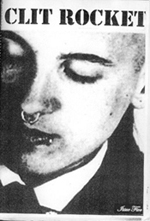 Clit Rocket is a queer zine from Vatican City, Italy, by Veruska Bellistri.

A number of issues of Clit Rocket have been published in the 2000's. The zine covers queer bands, topics dealing with gender, feminism and race, and art by women. It is primarily in English, with occasional articles in Italian.

The inside cover of Issue five, released in 2006, announces that the zine is about, "Gender plus...F*U*C*K, Critical Feminism, glitter stars & faggot art!"

Issue five includes interviews with writer Inga Muscio; artist, musician and zinester Nicole Georges of the band Fact or Fiction and the zine Invincible Summer; Bob of the bands Shemo and Swan Island, and the label 16 Records; the band Boyskout; articles on the artists Adrian Piper and The Guerrilla Girls; an interview with photographer Kerstin Buchwald; a comic about attending Ladyfest by Nina Nijsten; an article on women of colour, in Italian; and various collages by the editor.