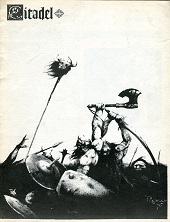 Citadel was a science fiction and fantasy zine from the 1970s edited and published by George and Lana Proctor out of Arlington (and later Grand Prairie), Texas, U.S.A.

The first issue was published in 1971, and featured writing by Larry Herndon, James Stringham, and Steve Utley, art work by Buddy Saunders, and the comic strip "Aesir" by Buddy Saunders and George Proctor.