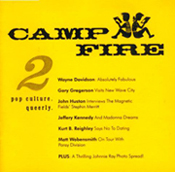 Released in the 1990's, the credit for issue one is "A Silent Twins Production". The "Silent Twins" were Jeffery Kennedy and John Huston. For issue two the publisher is listed as "Picnic", which was Jeffery's graphic design business. Each issue consists of essays, articles, interviews and stories from a queer male perspective.