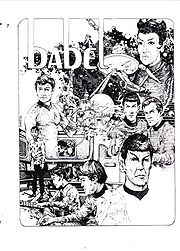 In the editorial in issue #3, one of the editors wrote, "Long ago and far away, my idiot sister and idiot self decided to do a fanzine appropriately named 'Babel.' IN a very big hurry we learned a few things about mimeographs, stencils, and oil-based inks and how bent drums leaked. Now we are learning about multilith and 50% reduction of pages and other nifty keen things about running our own fanzine."