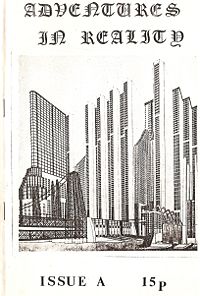 Adventures in Reality is a UK based fanzine from Coventry run by Alan Rider which ran from 1980-1984 over 12 issues numbered alphabetically through A to L.

Starting out as an A5 size photocopied fanzine, it quickly moved up to A4 size offset litho printed, with some issues featuring special packaging (for example one came in a screen printed brown paper bag, another was part of a jointly issued two fanzine pack with Nuneaton fanzine Damn Latin and came in a folder). Each issue also include one or more free gifts ranging from exclusive badges to toffees and tea bags! Issue J gave away a free two track flexi disc by Gothic industrial band Attrition - this was their first released recording and is now highly collectible. Content included exclusive interviews with indie, goth and industrial bands ranging from local acts to Bauhaus, SPK, Delta 5. It included extensive record, cassette, gig and fanzine reviews, personal views on everything from TV to architecture, along with features on various countries underground music scenes often guest written by other fanzine writers. The last issue (Issue L) accompanied the Last Supper compilation tape and featured an exclusive interview with SPK. A new 16 page one off special edition was recently published in August 2012 as an insert with the Stress retrospective LP 'Conspiracy Theory'.

Adventures in Reality is also featured in Teal Triggs recently published book Fanzines, an extensively researched and lavishly illustrated reference book on fanzines and their development through the decades, and the book Art of Punk.

A spin off record and cassette label, Adventures in Reality Recordings released exclusive material from an international cast of bands including Attrition, Stress, Bourbonese Qualk, SPK, Test Department, Religious Overdose, Velvet Monkeys and Audio Leter. Spin off fanzines also produced by Alan Rider were Sticky Fingers,Certain Substances , Negative Reaction and Not the Job Hunter and Alan also contributed to various national music magazines including Spiral Scratch and Empty Quarter, as well as forming the bands Stress and Dance Naked, both of whom released material on Adventures in Reality Recordings.

Alan is currently writing a book on Coventry fanzines from 1979-84.