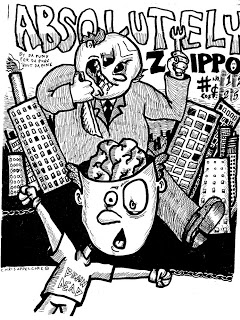 Absolutely Zippo is a punk zine created by Robert Eggplant in the late 1980s to document the events of the East Bay Berkeley punk scene. It is still being published today.

Absolutely Zippo is unique in that editor Robert Eggplant was also a member of the bands Blatz, The Hope Bombs, Harbinger, and Lil' Runt, as well as a volunteer at 924 Gilman Street Project and the Long Haul Info Shop, and so his zine offered an inside, on the frontlines view of the punk scene.

In 1999, Absolutely Zippo was compiled and released in paperback. This volume is entitled Absolutely Zippo: Anthology of a Fanzine 1988 - 1998. Over ten issues have come out since then, including one made with dumpstered paper from UC Berkeley.